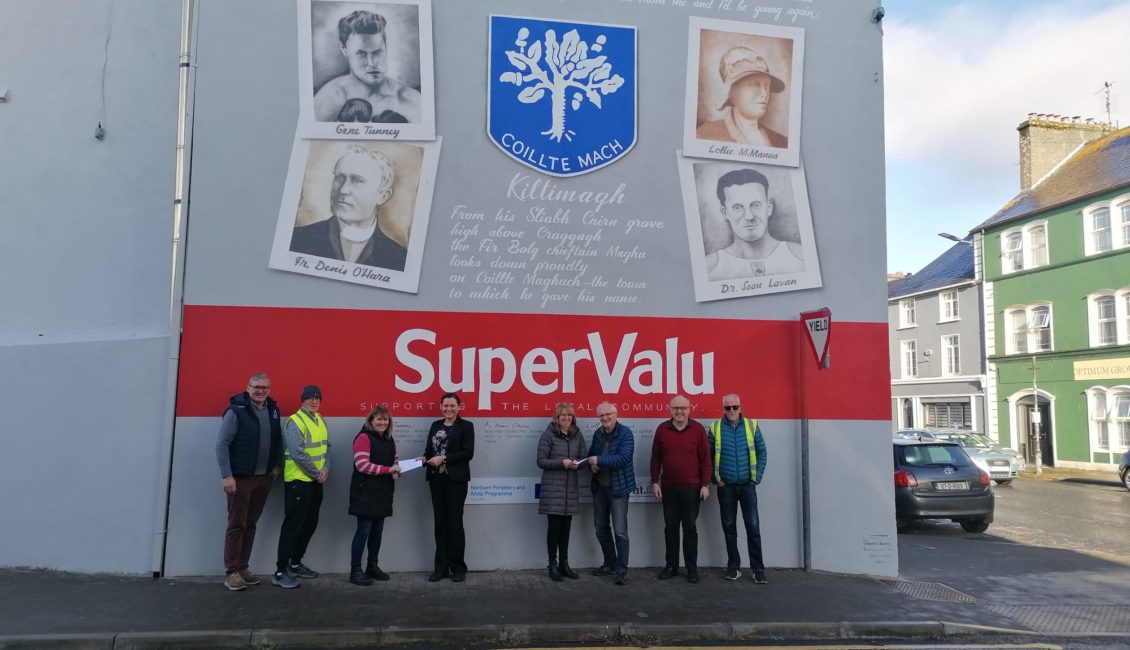 We have received incredibly positive feedback from the community for this new Mural which has become a landmark in the centre of the town. We wish to acknowledge Damien Moran and Seamus Cosgrave for their excellent work. To Gary Begley for allowing us to use his wall. Basil Burke for the pictures and the historical content of the four people selected. Terry McDonagh for his poetry knowledge and contribution. Murt Dunleavy and the Tran Year students for their help and the video diary they have produced. A special thanks to our sponsors Supervalu to Noel Kavanagh and our local Manager Emilia Dusinska. To our other sponsor Mary Keavney on behalf of the Spot-Lit Literary Tourism Programme. This was a partnership project between the Kiltimagh Tourism Association Committee and Kiltimagh Tidy Towns Committee which proved highly successful.

Despite all the delays and uncertainty that Covid presented us with, Kiltimagh Tourism and the Tidy Towns Committee managed to complete a wonderful mural that made a statement of intent and added a new face to Kiltimagh – the town is indebted to Mary Keavney representing Spot- Lit, Literary Tourism as well as SuperValu sponsorship for making this possible. The community is delighted with the work of artist, Damien Moran. It consists of a few words of Raftery’s poem; a short piece on the origin of the name Kiltimagh by poet, Terry McDonagh as well as the artist’s impressions of four people who make a significant contribution to the image and reputation of the town. They are:

Fr. Denis O’Hara became Parish Priest in Kiltimagh 1887. He had spent a short period in the Parish as curate after his ordination in 1873 and was well aware of poverty in the area. He was a champion of the poor, a builder and amazingly successful fund raiser. The wooden church in Kiltimagh

was replaced by the building still in use today – he also built the Parochial House and six new national schools in the parish. Fr. O’Hara became a member of the Congested Districts Board and was accordingly instrumental in improving hygiene, living conditions and farming methods of his parishioners by obtaining grants available for improvement of farms and houses.

Fr. Denis became an ardent supporter of the Land League founded in 1878. He spoke at public meetings in Gurteen and Ballaghadereen (Nov 1879) and Curry (Jan 1880). These meetings were attended by crowds of up to 15,000 people.

He involved himself in the work of the newly-formed Congested Districts Board helping to alleviate local poverty and became a member of the Board in 1895. In  Kiltimagh he was responsible for the building of roads, schools, two parochial houses, a hospital and a church. He was also responsible for bringing the St. Louis Sisters to the town building them a convent. As if that was not enough, he brought the railway to the east Mayo town as well.

With the Congested Districts Board he set up the Parish Committee system which gave Board money directly to people in the form of grants. Fr. Denis also worked closely with John Dillon MP and was widely regarded as being one of the greatest social developers of his time.