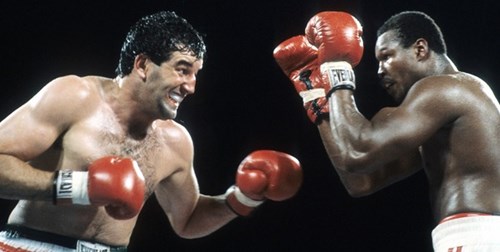 Known for his big left-hook and his imposing size, the tall, lean Cooney had his first paid fight on February 15, 1977, beating Billy Jackson by a knockout in one round. Nine wins followed and Cooney gained attention as a future contender. Although his opponents were carefully chosen. He moved up a weight class and fought future world cruiser weight champion S.T. Gordon in Las Vegas, winning by a fourth round disqualification. Cooney had 11 more wins, spanning 1978 and 1979. Among those he defeated were Charlie Polite, former US heavyweight champion Eddie Lopez, and Tom Prater. These were not rated contenders however.

By 1980, Cooney was being featured on national television. Stepping up, he beat one time title challengers Jimmy Young and Ron Lyle, both by ‘knockouts,’ although the Young fight was stopped because of cuts sustained by Young. By now he was ranked number 1 by the WBC and eager for a match with champion Larry Holmes.

In 1981, he defeated former world heavyweight champion Ken Norton by a knockout just 54 seconds into the first round with a blisteringly powerful attack. This broke the record set in 1948 by Lee Savold for the quickest knockout in a main event in Madison Square Garden. Since his management team was unwilling to risk losing a big future pay day with Holmes by having him face another viable fighter, Cooney did not fight for 13 months after defeating Norton.

The following year, Holmes agreed to fight him. With a purse of ten million dollars for the challenger, it was the richest fight in boxing history up to that time. The promotion of the fight took on racial overtones that were exaggerated by the promoters, something Cooney did not agree with. He believed that skill, not race, should determine if a boxer was good. However, if Cooney won, he would have become the first Caucasian world heavyweight champion since Swede Ingemar Johansson defeated Floyd Patterson 23 years earlier. This caused Don King to label Cooney “The Great White Hope.” The bout drew attention worldwide, and Larry Holmes vs. Gerry Cooney was one of the biggest closed-circuit pay-per-view productions in history, broadcast to over 150 countries.

Cooney fought bravely after he was knocked down briefly in the second round. He was fined three points for repeated low blows. After 12 rounds, the more skillful and experienced Holmes finally wore him down. In round 13, Cooney’s trainer Victor Valle stepped into the ring to save his fighter from further punishment. Two of the three judges would have had Cooney ahead after the 12th round if it weren’t for the point deductions.

Aster a long layoff, Cooney fought in September, 1984, beating Phillip Brown by a 4th-round knockout in Anchorage, Alaska. He fought once more that year and won, but personal problems kept him out of the ring.

Cooney was far past his prime when he made an ill-advised comeback against former world heavyweight and world light heavyweight champion Michael Spinks. Boxing carefully, with constant sharp counters, Spinks knocked him out in round 5. Cooney’s last fight was in 1990. He was knocked out in a match of the veterans in two slugging rounds by former world champion George Foreman. Cooney did stagger Foreman in the first round, but he was simply over-matched, and Foreman knocked him out two minutes into the second round.

Cooney compiled a professional record of 28 wins and 3 losses, with 24 knockouts. He is ranked number 53 on The Ring’s list of “100 Greatest Punchers of All Time”. 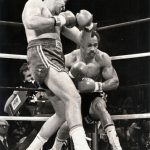 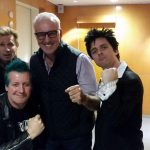 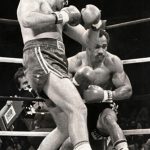 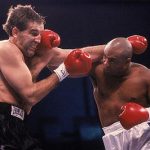